How many of you  remember when a quart of milk, a tank of gas, fish bait and a video was more accessible by boat than by car? In about 15 minutes, a 5 foot tide and a 35 hp outboard could get you to the quaint little Seabeck Marina, complete with gas dock, bait shop, Turie’s Seabeck Espresso, Seabeck Landing General Store, and Barbie’s Seabeck Bay Cafe.

6 or 7 years ago,  the docks were condemned and the marina closed – taking away the only destination you could get to and back before the tides shut you out of Fisherman Harbor~!
The new marina, Olympic View Marina is slated to open sometime soon…well, sometime, anyway – hopefully in our lifetime. What’s taking so long?   Bureaucratic red tape, investors coming and going,  mobs with burning pitchforks  and money – lots and lots of it – coming out of the pockets of the developers Boyer Halvorsen and Will Clark – who are working  on the project themselves. The entire project was estimated at about 4.5 million. the floats alone would cost $1.5 million.
To add to the challenge, there are  “fish windows” during which all construction must cease.

Thankfully, equipment isn’t a problem. Boyer Halvorsen owns  Boyer Towing, a major marine towing, barging, freight and construction company serving Washington and Alaska The encouraging news is that the new pilings have gone in and as you can see, they look dandy! But progress is slow 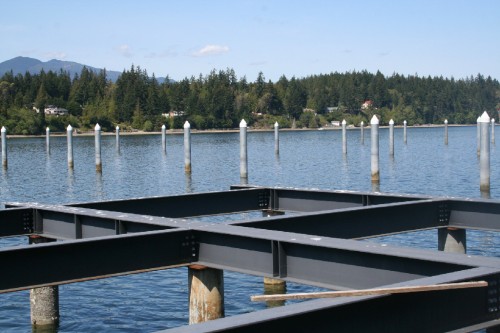 The latest word from Kitsap Sun reporter Brynn Grimley is that they are coming up on some deadlines for their permits and that they hoped to have at least guest moorage in that could start bringing in some revenue.
According to Seabeck General Store,  there is currently a walkway and pier in place with rumors that a ramp and at least one dock will be on the water by next month (September) but as she said, “I’ll believe it when I see it”
Meanwhile… Be kind to our dock and  appreciate its value – we’re lucky to have it!! 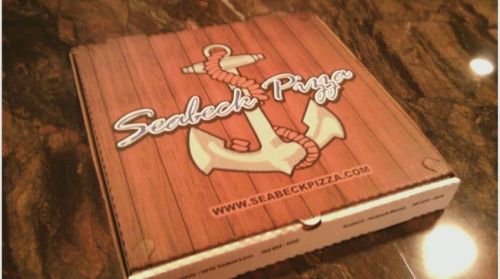 Comments Off on Seabeck Marina Update